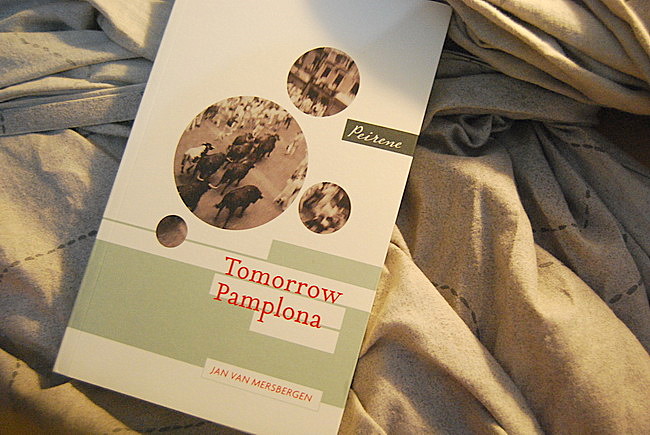 On Tomorrow Pamplona by Jan van Mersbergen,
translated from the Dutch by Laura Watkinson.

This is the contemporary adult, if slightly embittered, [male] road trip. Danny, a professional boxer on the run from some unnamable horror, meets Robert, a family man on his yearly pilgrimage to Pamplona. There’s not so much self-discovery here as there is a forcefully selective sifting of one’s life; not so much male bonding here as two men on the run doing said running together, and whatever destination will do. Eventually, we’ll feel as though Danny and Robert are simply stalling, having taken a step away from the usual trajectories of their individual lives. But Pamplona. Pamplona will push them forward, push them to finally act.

Tomorrow Pamplona, he hears Robert say. And, after a short silence, he adds: Don’t forget Pamplona.

Although both have their own reasons for this trip—and, true, even the fact that they’re running away from something is only hinted at with one character, and with the other, that precise something is revealed only until nearly the very end of the book—we see more of Danny’s life. Robert is a stand-in, albeit a necessary one—he’s a symbol for a possible alternate life: The man whose picture of his family’s in prominent display in his car, whose children’s toys litter the backseat.

[Funny, I was struck by how the meeting of these two seem to be a meeting of two possible trajectories in man’s life: One of adrenaline and fists, the other of briefcases and the hugs of children.]

It’s on Danny’s shoulder that we witness the events unfolding, and it’s Danny’s life we learn most of. There are two parallel narratives, and Danny’s at this the center of both—the present with Robert, and where he came from. It’s a gradual and tense build-up, a slow revelation that follows no conventional guide about segues. Revelations that are graver and graver, too.

Both narratives course steadily, their ends inevitable. Danny’s story is already whole, mind you—it’s all in how van Mersbergen chooses to reveal details. It’s not unlike running your hands slowly over a woven cloth, and gently unraveling the threads to look at them more closely. Undone, yes, but this closer examination makes the entirety more whole than ever.

[And when they brush against each other, it’s pure, chilling magic: A bull glancing against Danny triggers a memory of the brush of his girlfriend’s Ragna’s hands. Shiver.]

The structure paid off, though it initially made this a challenge for me to read. That is, it took me a long time before I resolved to finally read this book—I was too restless to settle down with it [—and then, it took me as long to think about it for this post, what I was going to say here—I was made too restless by the reaction it drew from me].

In many respects, this isn’t the book I usually read. It’s not exactly the characters. And, mind you, the subject matter isn’t necessarily hypermasculine—the road trip, the boxing, the bull-running: these are generally male matters, but they don’t make the book male. What made me apprehensive was that it seemed like the language was male, if only because it reminds most readers of the hard-edged brevity of Dead White Guy-Giants, Hemingway and Kerouac.

I am a fan of neither. And it’s not the directness of such novels, the straightforward tone that nonetheless makes room for diverse, multilayered readings—it’s that edge. The brusqueness, as though the narrator was barking or snapping off the words in between puffs of his pipe.

In Tomorrow Pamplona, that edge [that I can’t seem to define very well, haha] is omnipresent. The sentences are so tense, they’re almost brittle. To match/mirror the characters, their personalities. Their preoccupations. Their predominant moods. And, of course, the language effectively hurls the reader through the narratives, at the risk of agitated toe-tapping and pipe-puffing and repeated blinking and a hitched heart rate. See an exchange between Danny and Robert:

Can I ask you something? says Robert. When can you tell that you’re going to win?

Right at the beginning of a fight?

Yes. And when you’re going to lose? Can you tell that just as quickly?

No, that’s not something you feel, says Danny.

Kudos to translator Laura Watkinson for capturing this terse-to-brittle brevity, a sharpness that goes from languor to urgency—I wonder how hard it must have been to restrain the language, to capture what van Mersbergen accomplished. And, see, the language is never static: there’s always room for poignancy, for the lyrical that resides even in such tension. Here is Danny talking to Robert about his girlfriend Ragna, among what he left behind:

She smokes in bed, he says. He can picture her lying on the bed in a rectangle of white moonlight, holding her cigarette up at shoulder height. He’s sitting at the foot of the bed, leaning against the slope on the wall. One hand on her ankle. She’s smoking very deliberately, as if in slow motion. If he’d been sitting to one side, he could have seen her thoughts as they crossed her face in the mirror. Then things would never have gone so far. But he couldn’t see her face. And all he could feel was the soft skin above her ankle as he stroked it.

No, says Danny. That’s not what she’s doing now.

And what about you? What do you do when she’s smoking?

Yes, this book put me through the wringer. Reading it, and thinking about it afterward. It’s—forgive the pun—a heavyweight. On the one hand, it brings a marked diversity to the book list offered by small publisher Peirene Press. On the other hand, it is a very, very good book, made better because I resisted it at first, made better because I am rather glad that I, and many [more] non-Dutch-speaking readers, had the opportunity to read this.