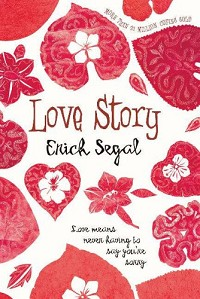 I’m not even supposed to own this book, for goodness’ sake. I’d seen this thin paperback with its happy little cover displayed for months now, and I kept thinking, Meh. But two nights ago. God, ‘twas a weak night. I panicked. I was chilling at a coffee shop, and I soon realized that the book I had with me wasn’t one I wanted to have with me. I ran to the bookstore next door. Went home with three (eek) books. One of them is this: Love Story, the 21-million-sold novel of Erich Segal (bless his soul).

What I know about Love Story: 1] Segal was both celebrated and scorned for it—that tedious debate between “commercial” and literary. 2] “Love means never having to say you’re sorry,” which has been used and abused to death—I remember characters in a Tagalog movie using this line, as well as others from movies like Jerry Maguire. But I digress.

Jenny dies. Let’s just get that out of the way (I mean, Segal does, in the first line). And after a short reflection on this beautiful girl who’s died, Oliver Barrett IV plunges us into WASP-ish turf wars. Which I know nothing about. And for which I would have left this book alone, especially since in those first few pages, I was reminded of a much more loaded. Holden Caulfield. Whom I don’t much like. But I digress. Again.

“I’m at Chapter 6,” I wrote in my notebook at the beginning of Chapter Six. “I am waiting to be charmed.” See, I was very very very dubious coming into this book. It’s Love Story, and at first glance, it seems like a distillation of all the tired tropes on love we’ve all endured: Boy Meets Girl, Boy and Girl Have Class Divide, Boy and Girl Laugh at the Face of Society and Get Jiggy With It, Boy and Girl Scrounge for a While. Ollie, in Unpredictable Narrator tones, even predictably hates his father:

“Jenny, don’t you believe I love you?” I shouted.

“Yes,” she replied, still quietly, “but in a crazy way you also love my negative social status.”

I couldn’t think of anything to say but no. I said it several times and in several tones of voice. I mean, I was so terribly upset, I even considered the possibility of there being a grain of truth to her awful suggestion.

And as with all stories of enduring love, they defy class norms and get together:

. . . Jenny and I were nonetheless kind to each other. I simply say “kind,” because I lack the vocabulary to describe what loving and being loved by Jeniffer Cavilleri is like. Sorry, I mean Jennifer Barrett.

Aww. Ahem. Oliver won me over, though. He’s got this aloof kind of loving for the brassy Jenny. You know he’s mad about her, but he’s dry and WASP-ish and a little snooty about it. And he can be so stubborn. But Jenny sees right through it. Oliver and Jenny take shape as characters so slowly, almost fleetingly, before you know it, they’re whole to you. Clap clap!

♦ It seems remiss if I don’t give you this, and so here it is:

I stood there at the bottom of the steps, afraid to ask how long she had been sitting, knowing only that I had wronged her terribly.

“Stop!” She cut off my apology, then said very quietly, “Love means never having to say you’re sorry.”

Yes, I buried my face in the pillow and squealed. So. God. Mr. Segal, wherever you are now, I am sorry to have underestimated your power to make me squeal at the slightest provocation. It seems like I’d been waiting for the elaboration to that line my whole life, haha. My goodness, you even made me sniffle. Because Jenny dies. You told us that at the very first sentence, and I knew she was going to die, but it was still devastating. It always is.

I wanted to hug Oliver. To the very end, there’s that aloofness, the wry way he has of talking about loving and being loved by Jenny. The knowledge that no words could possible equate the actuality. Oh, so WASP, so dignified, so stubborn. And that just made me feel more. It’s like seeing a little boy fighting not to show anguish or defeat or tears or effusive adoration, struggling not to cry.

And what pop culture never told me about that immortal line was its echo within the book. Right at the edge of it, in fact. I flipped the page even though I could see there wasn’t anything printed at the back, but I kept hoping. “Oh my god,” I breathed.

I take it back, what I said about this being the Usual shtick. It’s not. It’s simple, and as multi-layered as I want it to be. It’s restrained and just bursting to announce what This Love is. It’s understated, calm, sometimes cocky, and it all builds up to an emotional sucker punch that just has you going around in a daze, telling anyone who’d bother to listen, “I just read Love Story. Love means never having to say we’re sorry! You hear me?!“

* * You know what? Nicholas Sparks totally ripped this off when he assembled wrote A Walk to Remember. Totally. Oh, and here’s a wonderfully passive-aggressive piece on Sparks, who really needs to be thrown into a cage match with Cormac McCarthy.